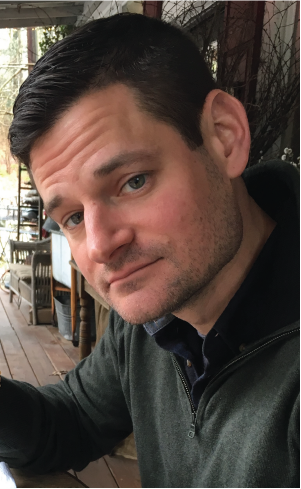 GRACE is honored to welcome Nick Carissimi as the new Marketing and Communications Manager. He has quickly taken his place on staff as a leader and guide on the arts and creativity.

As with most true artists, Nick suffered early in his career. He survived four years at a small technological college clinging to the edge of a high plains plateau on the Llano Estacado in a gritty West Texas town best known as home to the Lubbock Cotton Kings of the non-defunct Western Professional Hockey League.

Still, he would not let this indignity keep him down. He knew his great-grandfather didn’t flee fascist Italy so his grandson could be stuck reporting on dust storms his entire career.

Nick joined Entercom Radio in 2008 and worked as a broadcaster, generated live programming, newscasts, and paid programming for the largest radio newsroom in the region, working with well-known local luminaries like fitness authority Larry North, and the legendary Texas gardening and horticulture expert Neil Sperry.

In 2012, Nick moved into the newsroom as a Producer for 1080-KRLD AM, reaching a weekly audience of more than 3 million listeners. He also served as a journalist and newscast anchor for the Texas State Network.

Entercom chiefs valued his talents so much in working with area media, public information officers, and PR firms, that Nick was promoted to the post of Public Affairs Director for the broadcasting giant.

It was while serving as Entercom’s Public Affairs Director that Nick’s calling came to serve those in need. He had worked with more than 300 charities and non-profit group throughout North Texas, and his concern for the hundreds of thousands of people served by these organizations grew tremendously. Nick vowed to bring his experiences and talents to bear on their struggles.

Recently, he teamed with British author and lecturer Andy Puddicombe and helped bring meditation training and mindfulness to millions on Radio Headspace, which rose to be in the Top 25 podcasts on ITunes.

Nick’s experience in journalism, public relations, content marketing, presentation design, and a mastery of social media platforms, website design, SEO practices, and all things communications, will help GRACE move to the next level of communications.