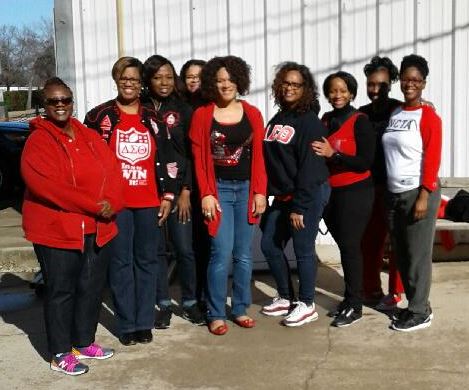 Dr. Martin Luther King, Jr. once said that intelligence plus character is the goal of true education. In this case, character was being formed even as school was out of session.

While most students were sleeping in during Martin Luther King, Jr. day, two special groups came to Donation Station to greet donors and sort goods that would later become material assistance and resale merchandise for families in need.

The local Delta Sigma Theta chapter sorority wanted to serve on this important day to honor the late Reverend King by showing unity through serving one another in love.

The national sorority is 200,000 women strong, whose focus is to nurture African-American women through education and public service.

On the same day the Southlake Carroll High School Freshman Student Council took the torch for the next shift at Donation Station to meet the needs their peers whose families might not be as fortunate.

Southlake Carroll ISD has had an outstanding history of serving the community through GRACE, most recently with their food collection competition this summer, collecting nearly 5,849 pounds of food.

We’ve done the arithmetic for you that the collected food provided an estimated 4,974 meals to approximately 1,200 families!

Both groups made the grade last week for integrity, compassion, and kindness. On behalf of the families we serve, thank you for giving that coveted time away from school to something that deeply matters to families in our community.

“This world demands the qualities of youth: not a time of life but a state of mind, a temper of the will, a quality of imagination, a predominance of courage over timidity, of the appetite for adventure over the love of ease.” — Robert Kennedy