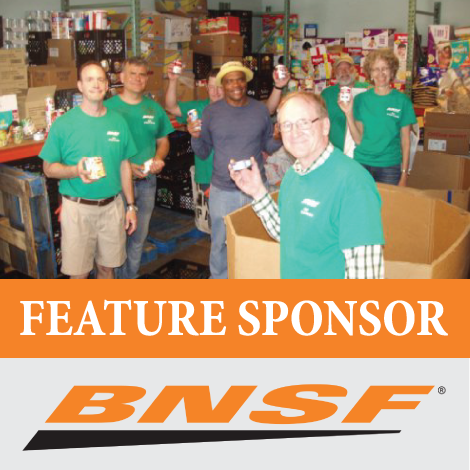 As the Official Décor Sponsor for the GRACE Gala, BNSF could not be more aptly recognized for their hard work to make GRACE sites both beautiful and functional over the years.

GRACE’s relationship with BNSF was forged with United Way’s historical “Day of Caring”, an initiative that motivates corporate partners to pursue service projects with local charities. Their investment has since evolved into various projects throughout the year.

The dedicated team at BNSF have cleaned, sorted, hauled and beautified virtually every GRACE site—from decorating the Christmas Cottage, to landscaping, painting and even taking on construction projects like entrance ramps and roof and concrete repairs.

In 2014 the BNSF Railway Foundation’s Officer Retirement Charitable Award made a $25,000 contribution to GRACE to honor the retirement of Tom Hund for his formative role in BNSF’s vision as the Executive Vice President and CEO. Since retiring, Judy and Tom Hund have made it their career to serve families in need at GRACE.

The support of BNSF as a Gala Feature Sponsor sets the stage for the annual theme, which embodies the heart of GRACE’s mission. This year’s “Light in the Darkness” theme speaks to the illuminating power one group has for families in the midst of a gloomy season.

Thanks to BNSF for making the GRACE Gala beautiful, and most importantly—recognizing the beauty in each client we serve.

BNSF Railway is one of the leading freight transportation companies in North America. The BNSF Foundation supports various causes, including grants, scholarships and a vigorous employee matching program.

The 2016 GRACE Gala will take place on Saturday, October 22 at the Irving Convention Center. As GRACE’s largest fund raising event of the year, the event revenue provides foundational support to further the GRACE mission. Sponsorships range from $2,000 to $20,000. Individual tickets are $325, and a table of ten is $3,000. Auction item sponsorships are also available.

For details how your business can be showcased at the GRACE Gala as an event or auction sponsor, visit GRACEGala.org or contact Mark Woolverton.